Hebrew letters, words, and language contribute a significantly to the Occult world.

Hebrew belongs to the Northwest Semitic group of languages and its modern variant is an example of a dead language that was successfully revived.  It contains 22 letters and is written right to left.

Since Hebrew plays such a key role in Western Esotericism, examples are often written by individuals that are not fully conversant with the language.  This has been going on throughout the history of Western Esotericism.  In magical and alchemical manuscripts and art, this results in some examples of genuinely bad reproductions of Hebrew letters.

Fortunately, these bad examples are great opportunities to deepen our understanding of Hebrew and to practice deciphering the Hebrew we see in source materials. 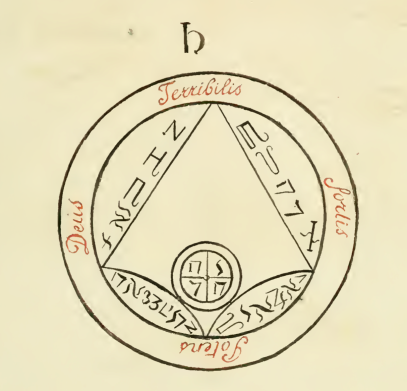 The example above comes from one of the manuscripts in the Manly P. Hall Collection of Books and Manuscripts, Le Grande Livre des Pantacles (The Big Book of Pantacles), circa 1700.

This is a pantacle associated with Saturn.

We can figure that out thanks to the symbol for Saturn hovering above the pentacle itself:

Take a good look at the Hebrew around the triangular design in the center.  Yes, all of that stuff is supposed to be Hebrew.  It’s a mess.  But we can start to decipher it.

Let’s gather some additional context clues.  We know that the pentacle is associated with Saturn.  And it’s easy to read and find a translation for the nice, clear Latin around the perimeter of the particle.   Terribilis fortis potens deus is translates to “Awesome strong powerful God.”  (Thanks to Brent Peters for the translation confirmation.  Don’t have a translator on hand?  Google Translate is your new best friend.  Machine translations are not as good as having someone translate material for you, but they are good enough to give us a clue.  I plugged the words in before Brent finished his translation and got “Awesome strong powerful God,” which is close enough.)

It’s also worthwhile to take a good look at the circular design in the bottom half of the pantacle.  It’s a representation of the Tetragrammaton and it is a useful example of the artist’s hand (how the artist forms letters).  Since we know that the Tetragrammaton consists of the Hebrew letters יהוה, we now know what those letters look like when this particular writer writes them.  (Hopefully — some hands are less consistent than others.)

(If you are slightly confused by the image above, please note that the artist started the word in the upper, right corner and then continued around counter-clockwise.)

Armed with our context clues, we can now examine some of that truly terrible Hebrew.

Remember that Hebrew is read from right to left.  Happily, the first letter is easy to identify — it looks like א (Aleph).  The second letter could be one of many.  It may be ו (Vav), since it looks like the ו (Vav) in the Tetragrammaton.  But it also could be ד (Dalet) or ר (Resh).  We will keep those options in mind.  The third letter is another confusing one — it could be ה (Heh) or a ח (Chet) or even ת (Tav).  The fourth letter looks easy at first — it’s curved like a כ (Kaph), but it could also be נ (Nun).  And the final letter?  Well, that’s a mystery.  It may be a ל (Lamed), but it doesn’t really look like any Hebrew letter to me.  So here is where we are right now:

Now it is time to play around with combinations of the letters and see if we can come up with anything that makes sense.  After some failures, we find that one promising combination is ארהנה (Arehanah).  We dig a little deeper and find out that Arehanah is an Angelic name associated with a Saturnian pentacle from the Key of Solomon, which contains a verse that is very similar to the Latin verse in our example. 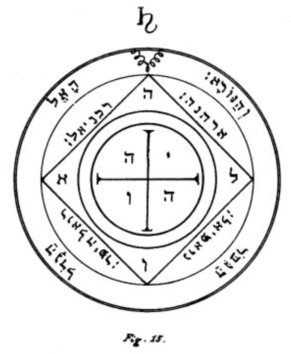 The Example above is the Fifth Pentacle of Saturn from the MacGregor Mathers version of the Key of Solomon.  The Hebrew around the outside reads:  “A Great God, a Mighty, and a Terrible,” which is from Deuteronomy 10:17.  That sounds really close to our translation for the Latin in the Pentacle we are trying to figure out.  And, if you take a close look at the upper right Hebrew on the outside of the square, you will find the Angelic name ארהנה.

And though it is hard to tell, because our original pentacle’s Hebrew letters are so distorted, we can work out that the other three Hebrew words around the triangle are, indeed, three more Angelic names.

It’s obvious that the individual copying out this particular manuscript wasn’t familiar with Hebrew at all.  However, it is a beautiful manuscript.  So don’t let your feelings of inexperience with Hebrew stop you from exploring this key component of the history of the Western Magickal Tradition…because it didn’t stop this guy!

Check this space for future updates as we explore the world of Bad Occult Hebrew!